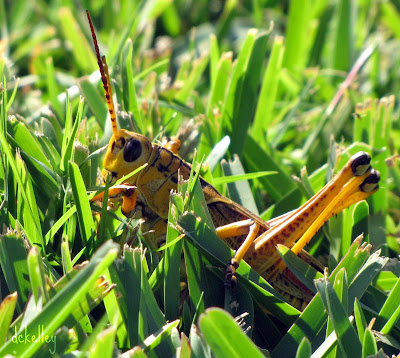 I took this photo when I was in Florida in November. I took many shots and this was the only one that was not blurry or shaky or half a grasshopper. We now have so much snow here in NH I think it will be forever before I see green grass or a grasshopper !
Posted by Deb at 1:36 PM 12 comments: 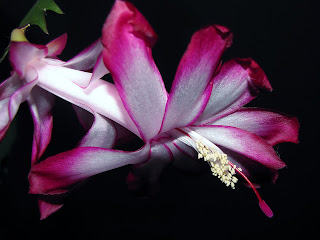 My "Christmas Cactus" has never bloomed on December 25th but was very close this year ! The beautiful flowers arrived for the New Year ! I am participating in 'Macro Monday' ~ always working on my photo skills !
Posted by Deb at 8:43 AM 13 comments:

The wisdom of a child

When I was a child, summer vacation seemed to last forever. We packed so much fun into each day ~ from the minute we hopped out of bed in the early morning until the moon came up and we ran around playing flashlight tag. But it just wasn't the summer time which seemed timeless. All of the seasons, all of the months, all of the days seemed to be endless. There was never any concern about running out of time. We just played until we collapsed. So many hours of tag, kickball, hide and seek, jump roping and bike riding. No need for planners or to do lists or even a watch. We just lived for each moment. We focused on the 'here and now' instead of getting lost in the past or wishing for the future.

We just lived for each moment. We focused on the 'here and now' instead of getting lost in the past or wishing for the future.

When I was seven years old I had a clearer understanding of how to be mindful of moments, on the importance of enjoying each day and on making the most of my time. Today at the age of fifty-three I have to work hard to accomplish these goals. I need constant reminders to stop and smell the roses. I get caught up in my past and worry to much about the future. I have difficulty appreciating the small 'things' in life. Those small 'things' really are the big things. Stress levels are high and lists are long as I try to do it all. The sad fact is that I often end up accomplishing very little since it can be difficult to focus on the here and now.

So through the writing of the post I have avoided long expensive hours on the couch of a therapist. I know what I need to do in order to live my life with purpose and intention. I will start appreciating and celebrating the small stuff. Being mindful of moments will be more than just words ~ I will walk the walk ! I will allow the inner child within to come out on a regular basis so I will be reminded of what is truly impotant. Time will not be my master anymore. A seven year old with a pixie haircut, skinny legs and crooked teeth will gently remind me to have fun because time is running out.
Posted by Deb at 9:55 PM 9 comments: 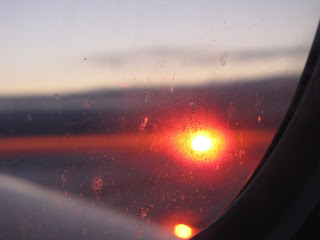 The flight from San Jose to Las Vegas was nondescript. Typical flight attendant speech during take-off, same small bag of dry crackers, and the dull murmur of voices mixed with the occasional hacking cough from the man sitting two rows in front of me. The sky was cloudy gray and offered little distraction for me. I thought about ordering a Bloody Mary to help me relax but decided that I needed to be clear headed to face what lie ahead. I read the same page in my book multiple times before I finally gave up. I tried a few deep breathing exercises but it felt like I was going to suffocate. Napping was out of the question. Couldn't this pilot fly this thing any faster ? Did he not realize that I was in a hurry ?  The question my kids had asked me a thousand times kept running through my head ~ "are we there yet?"

And finally we landed. It was one of those bumpy, hang onto the seat in front of you while saying a little prayer, landings. Of course I was seated way back in the plane. I impatiently waited for the gazillion people in front of me to get their belongings. Jeez, this must be national slow motion day and nobody told me. Do these people not know that I have a situation and I need to get off this  piece of metal immediately? PRONTO. I turned my cell phone on. No new messages. I decided that was a good thing. No news was good news. I worked on my deep breathing exercises as I fought the urge to climb over the seats in order to get off the plane. Did the lady in 22A not understand that I was in a hurry? Obviously not as she decided to stretch her arms, readjust her panties and freshen up her lipstick in the middle of the aisle. I bit my tongue. Somebody somewhere decided this would be a good day to test my patience. Not sure I will be getting a gold star on this one.

I don't think I even responded when the flight attendant and pilot flashed their unnaturally white smiles at me as they told me to have a great day. If they only knew. Parts of that day seem like a blur while other parts will never be forgotten.

I had never been to the Las Vegas airport before so it was rather overwhelming to be greeted by rows and rows of slot machines. People stood at the machines trying one last time to hit it big. It was the perfect location to do some prime people watching if I had been in the mood, if I had nothing else on my mind, if I hadn't felt like I was going to vomit at any second.

I had a very short layover in Vegas before jumping onto the next jet for the final leg of my journey. I was headed to Florida to see my dad. One more time. Over the past few months Dad's health had been failing and I had made many trips from my home in NH down to Florida. It only takes a few hours if I get a direct flight and if the pilot puts the pedal to the metal. Hmmm...do planes have gas pedals ? I must google that at a later date.  But this trip was entirely different.

I had been visiting my oldest daughter in sunny CA for a couple of weeks. She had recently given birth to her first child and my husband and I were meeting our granddaughter for the first time. She truly is our little sweet pea. We were spending our days cuddling, snuggling and bonding with her. But it was while I was there that I received the phone call that Dad had been moved to a hospice facility. I knew this day was coming. I had been to visit Dad two weeks earlier and it was clear that his life here on Earth was coming to an end. I told him that I loved him. He told me that he loved me. There were no deep revelations or new understanding. There were no apologies given. There were no secrets shared. There was just the love between a dad and his daughter and that was enough. So when the phone call came telling me that he was in Hospice I did lots of self talk ~ " Debbie, you are prepared for this. You knew that this day was coming. This isn't a shock. Buck up girl. Go enjoy your little sweet pea. You said your good-byes. Be strong."   I decided this might be a good time to try out some deep breathing exercises or meditation or yoga since I felt as if I was going to start vomiting violently. So I did what I do best in emergency situations...I cried. Hard. Non-stop. And in the middle of the night I knew what I had to do. I had to get to my Dad's side one more time so I could tell him that I loved him - just one more time.

I told my story to the lady at Southwest Airlines. She worked hard to get me to Tampa as quickly as possible but the reality is that CA is far away from Florida ~ over 3000 miles in fact. She booked my trip for me. I would be by my Dad's bedside in ten hours if you factor in time zone changes which always confuses me.  My next call was to my sister who was with my Dad. I asked her to hold the phone to my Dad's ear. "Dad, I'm coming. I'll be there as soon as I can. I need to see you Dad. I love you Dad."  Please don't die Dad. I'm not ready for this. I need more time.

I sat down on a hard plastic seat outside of the airport bathrooms surrounded by hundreds of people. I hit the speed dial button which would connect me to my sister. She finally answered. "Deb, Dad passed away ten minutes ago."  No. She must be mistaken. I was pretty positive he was going to wait for me to get there so I could tell him just one more time that I loved him. How could it be that time had run out ?  I needed to tell him just one more time how much he had meant to me. But just like all those people standing at the slot machines, my luck had run out. I had run out of time. Again.
Posted by Deb at 11:06 AM 17 comments:

Deb
I treasure my family and friends. I love cooking big meals and sitting around enjoying good food and wonderful conversation. I love to laugh and be silly. I am finally learning to understand who I am and to accept that person.

Text & photographs are mine, unless otherwise acknowledged ... do not copy. It will make me grouchy.

Just a few of my favorite blogs ~

A peek into my bookbag...