In January, our family celebrated the birthday of my grandtwins. They turned one year old. We had balloons, cake, gifts and the house was filled with laughter and the sounds of celebration.

In January, Phoebe Prince made the decision to end her life. She was fifteen years old. Her younger sister found her hanging in the stairwell of their apartment. Phoebe was the victim of bullying at South Hadley High School in Massachusetts. Her family had moved to America in the autumn of 2009 from Ireland. Phoebe was the new kid in town. And she was not met by the Welcome Wagon.

A freshman at So. Hadley High, Phoebe probably...maybe... dreamt of attending football games, semi-formals, giggling with girlfriends, getting her driver's license, going to concerts and finding Mr. Right. I don't know for sure. I never met Phoebe Prince but I wish I had. I wish I could have put a protective cloak around her and protected her from the bullies ~ the seven girls and two boys who saw it as their right to ridicule Phoebe constantly with verbal abuse. Nonstop. Throwing cans at her as they drove by. Drawing obscene pictures of Phoebe and hanging them for all to see. Emailing her, texting her, Facebook bullying, calling her obscenities as she entered the classroom. 24-7. I have a heavy feeling in my gut as I think about how Phoebe felt every day when she entered hell school.

I have been having flashbacks to my days in junior high school. The new kid in town, I was bullied by three girls. Three mean girls.  Nancy, Valerie and Maureen verbally teased me and physically pushed me around ~ I avoided the stairwells and empty hallways. I feared being locked in a locker - yes, I was quite skinny back in those days and easily could have fit into a locker. They told me they were going to shove me in there and that no one would find me for days. Looking back, I now realize that I probably would have been found alive but at the age of 13, it was a threat that I took seriously. They pulled my hair. They elbowed me hard. I went home and cried. Mom told me to ignore them. I tried. Fortunately, after a year of this abuse, someone new moved into town and they moved onto their next victim. Phew.

So I am now obsessed with Phoebe Prince. There has been a fair amount of finger pointing as to who is at fault. The school, the bullies, the parents of the nine bullies, society at large...you and me. Have you ever looked the other way when you have witnessed a bullying situation ? Would you step in and get involved ? We must. Our society must take a stand against the bullies of the world. And I mean that wholeheartedly and sincerely.

When my husband and I were in Washington, DC recently, we stood in many lines throughout our visit. Musuem lines, restaurant lines, White House lines...but we were patient and chatted quietly while waiting our turn. One day we were in a long line while in the Smithsonian. There were fifty people behind us in line. I know because I counted them while waiting patiently. I noticed two teen-age girls quietly walking up the aisle, cutting everyone in line. I thought to myself, 'No. They wouldn't dare cut fifty people. They must know someone in line.' Well. Apparently they thought they knew me because they cut right in front of me. Out of all those people they picked the wrong lady to cut.
"Excuse me. You don't really think you are going to cut in front of me, do you?"
They turned and just glared at me.
"I am in line. I have been in line and you are not going to cut in front of all of these fifty people. The line forms at the rear, girls." I smiled, sort of.
They realized that I am teacher material. They realized that I am uncuttable.
"Oh. We didn't know there was a line." And they turned themselves around and went to the end of the line.
People around me thanked me, stating that they were glad I spoke up. They wanted to but they didn't dare. They didn't want to get involved.

Well, I am going to get involved. I am a protector of the underdog. I will take on the bullies of the world. I  want to get into my car and drive down to South Hadley and have dicussions with the nine bullies who took Phoebe's life. I wonder if they were bullied at some point in their life. I read with sadness that one of the girls wrote 'Accomplished' on their Facebook wall the day after Phoebe ended her life. I want to talk to the parents of all involved. I want to help.

This is not the world I want my grandchildren to grow up in. I want their world to be one full of love, rainbows, four leaf clovers, peace, daisies, balloons and nonstop laughter ~ a life of celebration. I will don my supergrandma cape and protect them from the bullies, remembering Phoebe Prince and the life that was stolen from her.
Posted by Deb at 11:46 AM 18 comments:

She stood on her front steps, soaking up the darkness. She felt almost giddy since she couldn't remember ever being up and dressed at this hour of the day. She couldn't ever remember seeing the sun rise before. Her fifteen year old body was filled with anticipation. She was going to attend her first sunrise service at a local church. Her parents were not church going people so her religious background was a blank page. Her knowledge of Easter centered around rabbits, candy, and new dresses. She knew that there had to be more to Easter than boiled eggs and baskets filled with plastic grass. She was grateful that her best friend had invited her to attend the sunrise service with her family.

She bounced around on the front steps waiting for them to arrive. She had an all-over good feeling about the day. The night before, her mom had made a cake shaped like an Easter Bunny. This was a huge accomplishment for her mom since cooking/baking were not her areas of expertise. The bunny cake had come out perfect and it was now the centerpiece on the kitchen table. Covered in coconut with jelly bean eyes and nose, it appeared to welcome all who entered this house. Her mouth watered just thinking about the huge piece of cake she would enjoy later in the day.

The sky was still dark when she hopped into her friend's car. She was a bit nervous since she had no knowledge of church services or ceremonies. She didn't know how to behave or what to expect. Her mother had given her a one dollar bill to give at church. She checked to make sure it was inside her pocket. She wondered who she had to pay or when. She decided that she would just follow the lead of her friend.

The service was held in a field on a hillside. She followed the people up the hill to where there was a huge wooden cross standing. She prayed, she sang, she clasped the hand of her friend. And as the sun rose over the hill, she felt her eyes fill with tears and her heart filled with a feeling she could not describe. A sense of hope and joy filled her entire being.

On the ride back to her home, the excitement and anticipation of the day which lie ahead made it difficult to sit still. She couldn't wait to tell her parents about her experience. Maybe her family could start going to church together each Sunday. Couldn't hurt to ask them one more time. Her belly rumbled and she realized how hungry she was. Maybe Mom would let her have a tiny piece of the Easter Bunny cake for her breakfast. It couldn't hurt to ask.

She bounded out of the car, the sun filling the sky. She ran into the house, singing one of the hymns she had just learned. She hoped her younger sister was awake so they could attack their Easter baskets. She entered the kitchen and stopped skipping. She stopped singing. The sun stopped shining.

Her mother stood in the middle of the room, hair disheveled, bathrobe pulled tight around her thin body. The dark circles under her eyes seemed darker then ever. "Mom, what's wrong?"
"Your father didn't come home last night."
"What do you mean? Where is he?"
"He went to the neighbor's house to play cards lat night and he never came home. Go get him."
Tears filled the young girl's eyes. She headed out across the lawn, a path she knew all too well. Before long, she looked up to see her father headed her way, his head down. She turned back to the house and stomped inside. He entered, head still down. His wife greeted him with an icy glare, her cheeks hollow, her face full of anger. She turned on her heel, and slammed her bedroom door behind her.

The fifteen year old turned to her father, and she waited while she slowly transformed into the role of parent. The smell of alcohol poured out of his entire being.
"What were you thinking?"
No response.
"Do you know what day this is?"
No response.
"Today is Easter, A day of new beginnings, a fresh start. What kind of day do you think we are going to have?"
He attempted to make eye contact. "I need to sit down."
"Fine. You go sit down and I will try to figure out how to make Mom happy. I will try to save the day. One more time."
She resisted the urge to slap him across the face. He soon passed out in 'his' chair and was snoring. She stood staring at him, not knowing where to turn. She looked at the door of her mother's bedroom, shut tight as her mother tried to protect herself from any more hurt. She tried to take herself back to the hill where she had felt safe.

As she walked past the Easter Bunny cake, she thought about how stale and dried out it looked. It no longer looked appealing or appetizing. She laughed at how naive she had been...new beginnings, fresh start...not this time.
Posted by Deb at 9:54 AM 11 comments:

We just arrived back home after spending six fantabulous days in Washington, D.C. ! We were there at the beginning of the Cherry Blossom Festival which was an event I have always wanted to attend. Over three thousand cherry trees surround the Tidal Basin area. The trees were given to the U.S.A. in 1912 from the city of Tokyo to celebrate the friendship between Japan and the United States. In 1915, the United States gave Japan flowering dogwood trees as a gift. The trees weren't quite at peak when we were there but it didn't matter. They were beautiful and I truly appreciated being able to soak up all of this beauty. Enjoy. 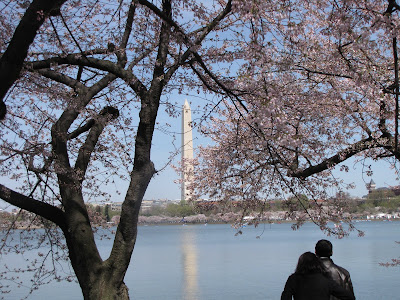 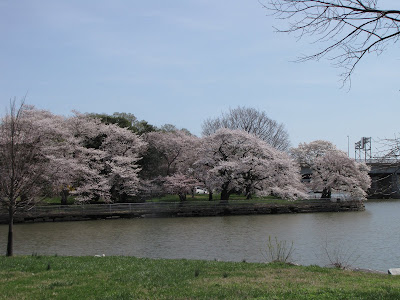 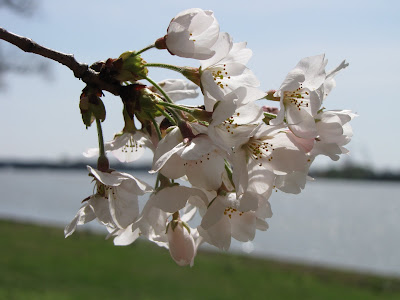 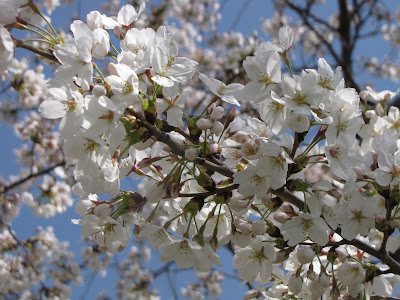 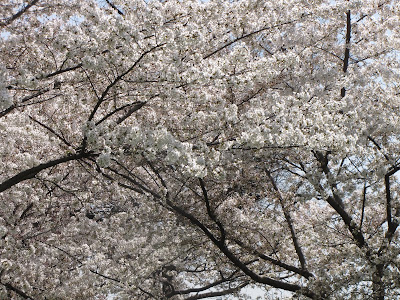 Deb
I treasure my family and friends. I love cooking big meals and sitting around enjoying good food and wonderful conversation. I love to laugh and be silly. I am finally learning to understand who I am and to accept that person.

Text & photographs are mine, unless otherwise acknowledged ... do not copy. It will make me grouchy.

Just a few of my favorite blogs ~

A peek into my bookbag...